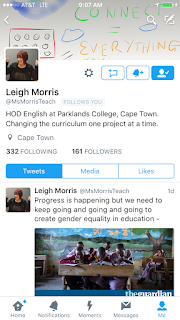 Twitter never ceases to amaze me. In August, my wife and I were enjoying a Saturday clothes shopping trip. I remember we were in JCPenney picking out our new school clothes. (This is an annual pilgrimage for us every August.) At some point during that shopping session, I received a Tweet from Leigh Morris. As I recall, she was asking me about Breakout EDU. When I looked at her Twitter profile and realized she was a teacher in Cape Town, South Africa, I immediately followed her and told her I would love to connect our learning communities together this year. It was a delightful visit via my iPhone Twitter app as I followed my wife around the store. It was easy to tell that Leigh was a passionate teacher, and I was so glad she reached out to me! These are the motivated educators I consistently encounter on Twitter.

If you have been watching this blog and my social media, you know I love connecting our students and teachers via Skype. Recently, we have been experimenting with Skype Translator using Spanish and Italian. I enjoy opening up our learners' minds to the enormous world waiting for them! There is so much to learn, and Skype connects us to new places and new friends.

About two weeks ago, Caroline and one of her friends, both sophomores at LHS, came to me asking if I could help them connect with pen pals in another country. They were working on an EAST project, and the first step was to begin establishing pen pals in distant locations. The fact that their teacher sent them to me for this assistance made me very happy. This shows that some of our faculty know about my Skype library sessions and/ or Twitter personal learning network (PLN). I want to be known as a connector in the building!

During our conversation, I immediately thought of my recent friend in South Africa, Leigh. I sent her a message asking about the possibility of student pen pal connections. She was all for it and within the following week our students were exchanging emails with her students! I offered for them to Skype in the library (if they could work out the time differences since South Africa is 7 hours ahead of us).

Caroline finally came to me one day to set up a Skype time. We agreed on an open time in the library (I wanted to make sure we could have this session in the library), and she coordinated with her new friend (Megan) in South Africa. The day arrived, and we attempted connecting with Megan. The tries were unsuccessful at first. We continued sending Megan emails to troubleshoot the process. Then Megan's first Skype call to us came through. Caroline answered the call, and the two connected face to face for the first time. From my perspective, it was as if the two had known each other previously. Caroline and Megan talked about similarities and differences of our school cultures during the session. It was wonderful to hear Megan's unique accent, and I am sure it was good for her to hear Caroline's as well. It was a short and meaningful conversation.  I can't wait to see what these two international friends do over the course of the school year. Be sure to watch the video (located below) of their first contact.

"It was really cool talking to Megan, I learned stuff I never had before. I was also surprised about how similar we both were. She and I had been talking 2 to 3 weeks before we Skyped, we have sent around 30 emails back and forth to each other just talking. It was really exciting to talk to her. It felt like we had known each other for a long time, it wasn't awkward at all." 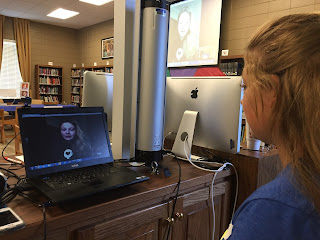 I look forward to their future connections. Also, Caroline's classmate will be arranging a Skype session with her pen pal in South Africa very soon. Perhaps, we can have them share about their connections and forthcoming EAST project on a future blog article. 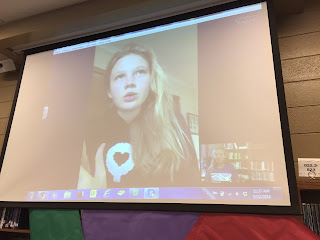 For me, this was a very powerful moment. I never stepped in to introduce myself because it wasn't about me. It was about two students in different places meeting each other for the first time. I merely helped Caroline connect with Megan using the technology in the library (and using my Twitter PLN). I want to do more of this when possible. It is important to allow students to take charge when appropriate. This is how they learn to be leaders! I have also learned how valuable a global PLN can be. Since I had connected with Leigh via Twitter, this was an easy task.

It is so good that this event happened in the school library. Think about how Caroline views the high school library at Lakeside. Hopefully, she and her friends will see it as a place to make endless connections with information, technology, and people. These adventures are only just beginning!

This is how we used Twitter and Skype to connect to a teenage inventor in Tennessee!

Reflecting on a year of connections in our school library. 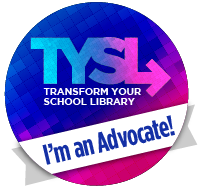